Another month, another bit of yuri goodness to keep you satisfied while the damn re-runs are airing on TV.

……Er, actually, is that still a thing? Television reruns during the Summer? Look, I haven’t watched TV in over a decade now, so I honestly don’t know. I’m just trying to give a reason for you to read some yuri, ok? Not that you need one ❤ 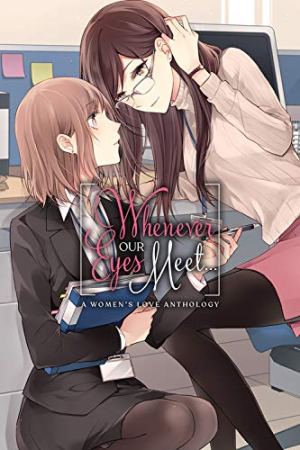 “The love between girls never stops blooming in this collection of office flings and workplace romances!”

I started reading this one just yesterday, actually. It’s basically a collection of really short yuri stories, like 12-16 pages each, all very cute and marked by my Yuri Stamp of Approval (by which I mean, while there are definitely softer stories, all feature definitively gay girls). The theme so far seems to be “what happened up to the point that we started dating”. Some are about girls finding out about their sexuality, but others are girls who already know they’re lesbian (as you can see from the summary, this anthology features “office flings”, and you know how those mature workplace ladies can get). The end of each story usually culminates in a kiss or an invitation to go out somewhere, and it’s all very pleasant indeed.

For a cheap $10, I can easily recommend this to anyone just looking for some more lesbian goodness to help get them through the rest of their day. Check it out! 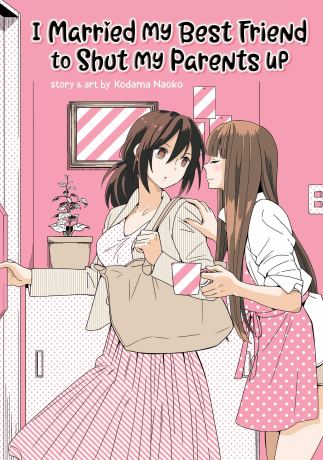 “A brand-new yuri manga about falling in love AFTER marriage!

Morimoto, a young professional woman in Japan, wishes her parents would stop trying to get her to marry a man and settle down. In an unexpected move, her friend from high school offers to be her wife in a sham marriage, to make Morimoto’s parents back off. But this “fake” marriage could unearth something very real!”

Ah yes, the ultimate no homo has arrived. “Gay?! No girl, we’re just faking a marriage, chill out rofl.”

Though I have to say, that’s a lesbian power move on the part of her friend. If you’re not sure if your best friend’s straight, just tell her how it’d be really funny to fake a marriage and freak everyone out. Then one night, while you’re in bed together, you start laughing maniacally and tell her it’d be really funny if you just suddenly had mind-blowing yuri sex. And then you spend the night converting the living hell out of her and the rest is basically history. Along with her heterosexuality HAHAHAHA*huff huff*.

Anyway, I haven’t read this one yet, so I’m not saying anything about the contents, ok? Don’t get your hopes up. Oh also, in case you didn’t know, this was written by the same author who wrote and drew NTR, though whether that means we should expect the same levels of yuri service is sort of up in the air especially since this is just a one-shot (sadly). Impressively, however, it’s been at the top of the Amazon LGBT manga category and #2 in romance books in general for a couple weeks now, so props for repping that Girls’ Love regardless! Our plan to take over the world is slowly but surely coming to fruition!

–>Did you know there was a “Yuri Day” tag in Japan on June 25th? Neither did I, but it was trending for most of the day and even into the 26th! It seems there are still people posting using the tag as well (because every day is Yuri Day, amirite?) so check it out if you haven’t already: #百合の日

–>Dharker Studios continues to make good progress on their three yuri games: Witches Brew, Dating Life: MileyxEmily, and Roomie Romance, and promises there are more in the works! Even if you’re not a patron, let ’em know you appreciate it on their Patreon: Dharker Studios Patreon

–>Winged Cloud dropped a hint that there a two new yuri games in the works, one of which will be drawn by the venerable Wanaca:

That’s all for now folks! Keep an eye out for the July post next month… if you’re ready to empty your wallet out that is 😉

A blog about panties, butts, and all that good ecchi stuff