I was wondering earlier today about how many yuri fans these days are new to the genre. I get the impression it’s actually quite a lot. So maybe not everyone will get how wack this is when I say it, but a little over a year ago, it wasn’t at all surprising for yuri fans when months went by without any new localized material. In fact, I remember when the “Yuri shall conquer the Earth!” meme first popped up on 4Chan as a half ironic, half hopeful,  and 100% serious declaration of superiority over the entire romance genre (quality over quantity, right?) and fans translated the entire SonoHanabira series themselves and put them up for free.

Looking around at how it is now, I thought I should stop and be thankful for how lucky I am as a yuri fan: multiple official translations of yuri VNs for the past two years, multiple manga every month, multiple actual yuri anime (including two more this fall), the “百合の日” (“Yuri Day”) hashtag trending on Japanese Twitter… and I  mean, for god’s sake, I have a backlog of yuri now! If you don’t understand how crazy that is, I’m telling you, you yuri n00bs don’t know how it was. Them was difficult times, youngsters. The only trouble we have now is the purity obsession, but I suspect it’ll die in a few years as yuri material diversifies.

…Anyway, keep it down, would ya? I’m trying to show you the tasty new yuri that came out this month, so quit babbling. Yeesh…

Update: This was delayed to August 6th literally the day after I wrote this post. Apparently at least one lucky Amazon reviewer still got it on release day, so I’m not sure if something had to be fixed or what…

“FIGHT TO THE FINISH!

After intensive training, Team Harukana is ready to compete in the Okinawa regional qualifiers! But it turns out that only one team will be allowed to advance to the national championships, which means only one team from the club will move forward. Can the Beach Volleyball Club survive being pitted against itself?”

It’s not hard to tell based on how I write that I don’t like “friendz” yuri. Not that I don’t like those kinds of shows at all, more that I just despise it being called yuri. Because, look, it puts up this big wall between actual girls’ love and Class BS.

That said, here’s what I have to say about Harukana Receive in this regard, now that we’re on Volume 4…

And that’s the long and short of it. Look, I don’t just call stuff yuri willy-nilly. This is the first manga I’ve ever read that’s not explicitly yuri that I would still call a yuri manga, in fact. Reasons being that 1) It’s confirmed in the manga that at least one of the girls has dated a girl, 2) Haruka straight-up confesses to Kana in an early scene without any subtext or “HAHA JK we’re besties!” crap, and 3) All the girls act really damn gay.

Add to that the appeal of hot girls in bikinis and I don’t really see how you can go wrong with this one. Really fun manga and worth a read if you don’t require a masterpiece story to go along with your ecchi entertainment (in which case, I’d suspect you’re a fairly jaded individual anyway :P) 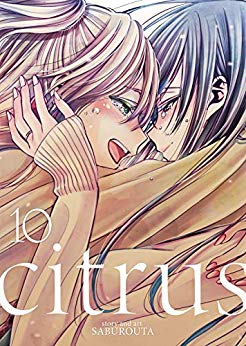 “In order to live up to her family’s high expectations, Mei decides to leave Yuzu and accept an arranged marriage. Though Yuzu is heartbroken, she tries to give Mei space. But when some old friends reappear, the two step-sisters are drawn together once more!”

Citrus, citrus, citrus… I have so much to say about this series, and yet I’m not sure how much time I want to spend talking about it. I have a love-hate relationship with it after Vol. 10 to be honest.

Let’s just start from the beginning. Citrus is my first-ever yuri manga. I read it at a time when I still thought ecchi harems were the shit and it opened my eyes to the exciting world of love, lust, and betrayal that was Girls’ Love (at least from a Citrus perspective). I absolutely loved the first volume. It was spicy, dramatic, boldly drawn, had great character designs… it was just an all-around excellent manga. And it still is, though I think it really started to lose its way around Vol. 6.

See, despite what the loud minority of commenters might say online, people like how dramatic and spicy citrus is. That’s why it broke out. It was a HUGE breath of fresh air in the yuri genre at the time, that’s for sure. And it wasn’t until it was brought to a wider audience of normies that we started hearing this hippo-critical nonsense (from people who I guarantee have seen much worse in other anime) complaining about “non-consent” or whatever other bullshit. Of course, meanwhile in reality land:

…years later, this thing is still outselling other LGBT works. And it’s because of where it started: as a spicy, bold, New York Times bestselling yuri manga that wasn’t afraid to break the mold. And no garbage-guzzling hippo-critics who only complain when yuri is involved could change that. It’s a series I really loved largely for this reason!

And so… yah, I guess I was a bit disappointed with Vol 10. That spark that made Citrus so special started dying around Vol. 6 for me, and unfortunately it wasn’t re-lit in the final volume. I remember we went multiple volumes without even a kiss, and when this volume finally came around, I know I and many others were so excited to see a very particular scene between Yuzu and Mei, but…

Well, look. The long and short of it is this: Citrus is a great series. And at the end of the day, I’m so thankful to Saburouta for this series and for introducing me to yuri. It deserves its success and I hope to see Citrus+ localized as well. Best wishes to Saburouta and I hope to see more yuri from her in the future! 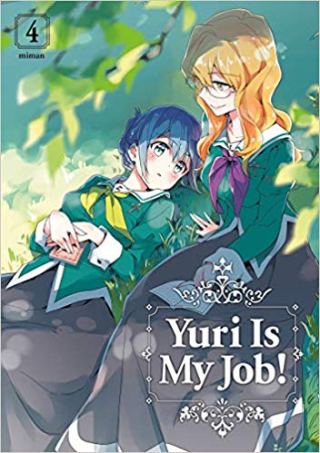 In order to maintain a peaceful workplace, Sumika tells Kanoko to give up on her crush. When Kanoko refuses, Sumika is cornered into sharing a cautionary tale about Liebe Girls Academy–one where a fellow staffer was hurt irrevocably. All the while, tensions and stakes are running high in the café as the manager reveals the Blume competition winner and Liebe’s new summer uniforms!”

Remember that crazy shit I showed you from last time? …Well if not, go read my May Releases 2019 post. Suffice it to say, I was pretty sure we were moving out of the “Shoujo Ai” zone and into some actual fookin yuri. Which is why I’m happy to announce that Yuri Is My Job! is indeed…

And if you don’t understand my elation, you probably haven’t read many yuribait or Class BS mangos so count yourself lucky xD But yes, there is a kiss of the lips variety, though I won’t spoil who it is. Things are only getting more interesting after this volume it looks like!

I will say, though, that the fundamental formula hasn’t radically changed. So if you hard dropped this series and completely hated Vol. 1, it’s probably not worth picking it back up. But if it was a soft drop, I would give this another chance, because things are starting to gain momentum.

“Play as Miley as she goes on her first date in years… but her partner might not be who she expected. After she inputted her own details incorrectly it leads to an unexpected date between two usually heterosexual women.”

Oh god yes. I have a weird and insatiable thirst for stories where the “heterosexual women” end up getting together and having mind-blowing lesbian sex (phew, welcome to my blog!) There aren’t many of them, so despite this being a shorter VN (as per the Steam page’s description), I’m quite happy to have the chance to play this tonight.

Dharker has had its ups and downs overall I’d say, but they currently have this and two other yuri games in the works, which I’ve already listed in my June Post. Not only that, but apparently this particular game came about thanks to the suggestion of a yuri-loving Patron on their page, so I have high hopes that this trend will continue! More adult yuri games are very much welcome for me, and whatever you might say about Dharker, they’re one of the few Western studios making 18+ yuri who also have that knack for ecchi-style art. I can definitely respect that.

Anyway, you can pick this up for $5 on Steam (that includes the adult content DLC, which you don’t want to miss when it comes to Dharker’s games) right now, so if you’re up for a sexy yuri quickie, check it out!

–>Thank god some of the manga that were scheduled to release this month were delayed to early August. This post would’ve been an ungodly length. That said, tune in next month, because we’re actually getting 3 completely new localized yuri series (as in, not continuations of ongoing series)! Can’t wait to share the info next month ❤

–>Anyone else worried about what happened to Razz, the creator of yuri visual novels like Love Ribbon, Wolf Tails, and the upcoming Bloom? Well, in case you haven’t heard the news, Razz Lives!

A blog about panties, butts, and all that good ecchi stuff